Hey Dungeoneers! v2.0.0 is unfortunately still a little ways off, but I am far enough into development that I’ve got a bunch of details to share!

While there are a few other odds and ends in v2.0.0, the major focus is a brand new hero! This blog will go over some of my design thoughts and early implementation work on this new hero.

What Should a New Hero Do?

Each hero in Shattered Pixel Dungeon attempts to fill out a fairly broad gameplay and thematic archetype. A new hero should fit into an open space within that roster, both in terms of theme and gameplay.

Of those two openings, I’m working on a new direct fighter first: The Duelist! She focuses on weapons and activated abilities, to contrast with the Warrior’s focus on armor and passive durability. Here’s an early peek at her splash art: 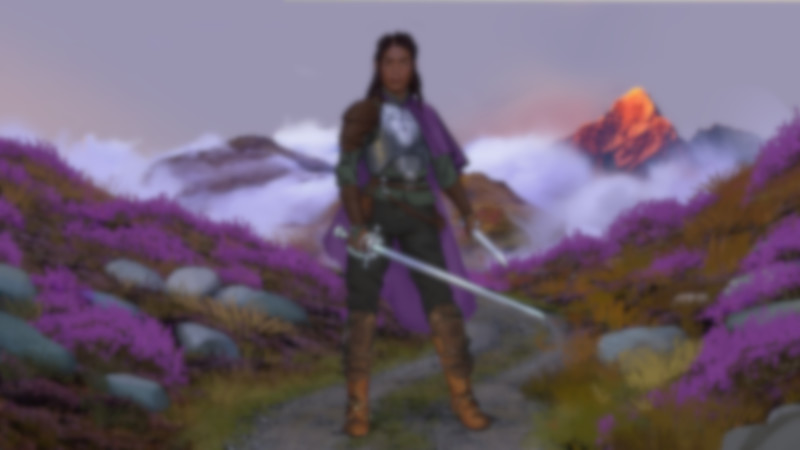 The Duelist fills in a sorely needed gap when it comes to the game’s existing weapon mechanics. Weapons are foundational to gameplay in Shattered, so I kept them simple to create room for more complex mechanics elsewhere (artifacts, wands, rings, etc.). Nevertheless, this ends up making weapons feel a bit lackluster. A very common point of feedback I get is that players would like to see weapons themselves do more.

The Duelist is a perfect opportunity to address that feedback. Her primary power is a unique ability that changes on a per weapon basis. These abilities are meant to augment gameplay and also provide a more visible and interactive power to each weapon.

Here are a few examples of weapon abilities that I’ve already fully designed and implemented:

While they’re not quite as solid as the various weapon abilities just yet, I do have two very promising subclass designs to share as well:

Implementation work on the Duelist is now going full steam ahead, but unfortunately I’m not in a position to commit to a beta date yet, especially with the holidays coming up.

I think it’s most realistic to expect something in January. This gives me enough time to ensure everything is working well, and also means I’m not rushed to get something out before the holidays start.

You can look forward to another blog post when the beta is ready, which will provide more detail on the Duelist’s subclasses, armor abilities, and talents!

You can also get some quicker small updates by