Hey Dungeoneers, I’ve got some more exciting news, Shattered Pixel Dungeon is coming to Steam in early 2022! I’m moving so quickly on this due to a mix of the game’s success on the iOS App Store, and a promotion from 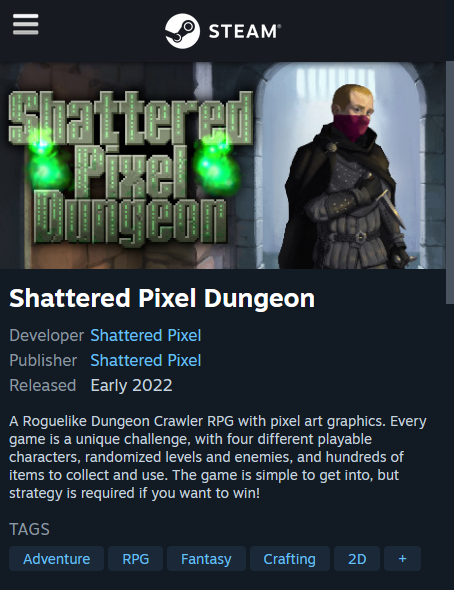 While the game won’t release for another few months, it already has a page on Steam! If you have any interest in the Steam version of the game at all, please considering adding it to your Steam wishlist. The game will be paid on Steam just like on the App Store, costing $10 US when it releases.

Just like with iOS, I want to give PC users a first-class experience. This requires some more direct changes than iOS though, as user-interaction is fundamentally different on PCs. I want the game to play just as well on big desktop screens as it does on tiny phone ones, and that means I can’t just scale up the game’s current mobile UI. Because of this, I have a bunch of plans for improvements to make before release. I hope to get most of all of them done in time for a release in early 2022.

Firstly, the most fundamental change is Native Executables for Windows, MacOS, and Linux. Currently the game requires the user to install Java on their computer, but there are ways for me to bundle Java with the game which allow it to be run/installed like a normal program. This is pretty crucial, so I plan to have this implemented with the release of v1.1.0.

After v1.1.0, I’m going to start working on several Core Interface Improvements, which take advantage of the extra real-estate of full-size computer displays. In addition to shifting some elements around, the most important thing I think will be to move the inventory into the main UI. This will allow the player to do all inventory-based interaction right from the main interface, instead of having to constantly open a window.

I have plans for other UI improvements as well. The extra space means that quickslots could be replaced with a hotbar. This would mean that an entire keyboard row (number keys) could be dedicated to game and item actions. The hotbar would at least work for items, but it’s possible I could extend its functionality to game actions as well.

Additionally, there is empty space at the top-left which could be used for more detailed enemy info. This info would essentially be a summary of the details normally shown when examining an enemy, including a health bar and active buffs/debuffs. Each enemy in view would have its own little info pane.

As a reminder, if you’d like to play the PC version as it is currently (a straight mobile port + keyboard bindings), it’s available right now on Github! I also plan to be releasing the game on Itch.io soon under a ‘pay what you want’ model, with $10 as the suggested amount. These versions of the game will also get the improvements I’ve mentioned above.

Once Roguelike Celebration is over I’m going to be getting back to work on v1.1.0, including those alchemy changes I mentioned last time. You can expect another full post about v1.1.0 sometime in November, but until then you can follow me on

My plans for updates after v1.1.0 are still not locked in, but there are some exciting things coming, especially once I’ve gotten PC porting work out of the way. We’re getting closer to 2022 so expect a big blog on it then, just like the yearly posts I’ve made in 2021, 2020, and 2019. It looks like we’re going to get through about half of the items listed in the 2021 post by 2022.