The beta for v1.4.0 is live right now! You can get it on Google Play by opting-in to betas, on Apple devices by signing up on TestFlight, on Steam by selecting the beta branch from the game’s properties, or directly download the game for Android or Desktop via Github.

In this post I’m going to go over what’s coming in this update. The headline content is new in-game lore, but there’s a LOT of other changes as well.

The most significant addition this update is a big expansion to the game’s lore! There is a new tab in the journal window for lore documents, and each region has a new six page document to find. In total there are 30 pages of letters, journal entries, and notes to find that give a little more detail on each of the dungeon’s regions.

Each of these documents is written by someone who has been in the region before the hero. I’ve tried to have each of them convey both a short character story and reveal more information about events or conditions in these dungeon regions before the hero arrives. Early on the documents are quite recently written, but by the end they are over 100 years old. Here’s a quick example, this is the first page of the document from the prison: 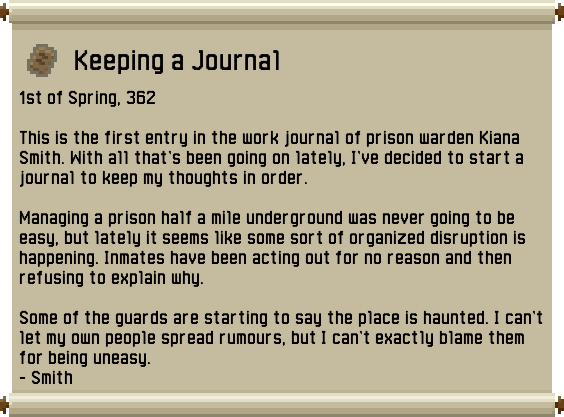 This is the first time I’ve done significant writing for Shattered’s story. A lot of these things have been in my head for years, and it’s great to finally get some of it into the game. Please let me know what you think! I’m also happy with the replay value this adds to the game, as you’ll need to play through each region multiple times to find all the pages.

This also won’t be the only time lore gets added to the game, eventually I’d like to have individual journals for the game’s heroes, and possibly documents about specific technical topics.

Firstly, v1.4.0 includes a new item! The Ring of Arcana passively enhances the power of enchantments and glyphs, letting them activate more often and with stronger effects. There is a lot of interesting gameplay potential in this ring, as upgrading it gives enchantments and glyphs a much bigger power budget than they’ve ever had previously.

The Sandals of Nature are also getting a big expansion this update. Their active effect is a bit phoned in currently, so I’ve expanded it to allow for a lot more flexibility based on the seed you’ve most recently fed the item. This should hopefully let the sandals be used for more than just farming seeds.

I’m also changing up the Berserker to make his berserk effect more controllable by the player. Berserking now has to be manually activated whenever rage is at or above 100%, but in exchange it has a much, much lower cooldown than before. I’m hoping that this makes the Berserker a bit more appealing to experienced players who didn’t need berserking as a safety net. Players who still want the safety net can access it via a new talent.

Lastly, I’m making some significant adjustments to the new player experience, including cutting down on early text and adding a short guided tutorial. The goal here isn’t to hold the players hand, but rather ensure they know how the basic game mechanics work, and to encourage them to read the game log and the guidebook. This new tutorial takes less than a minute.

v1.4.0 also includes more smaller changes and improvements than probably any other update. When I decided to postpone the rework to the blacksmith quest, I also decided that v1.4.0 would be a good opportunity to catch up on a big list of smaller changes I’ve been building for years. v1.4.0 has addressed about 90% of the items on that list!

There are far too many things to cover in this post, but here’s a quick rundown of the highlights:

I’m expecting the beta for v1.4.0 to last for about a week, as usual. Look forward to a full release in early October!