Hey Dungeoneers, I’ve got some news to share on the Steam release!

Development has been progressing well, and Shattered Pixel Dungeon will be participating in Steam Next Fest, running from Feburary 21st to 28th. During this time there will be a free demo of the game, letting people try the desktop version out before it fully releases with v1.2.0.

The demo will feature all game content until the end of floor 10. Descending after floor 10 will redirect players to a screen congratulating them for completing the demo. Demo runs can still be continued from just before the moment the player descends and will carry over to the full game.

The demo will be available a bit before Next Fest on February 9th at noon EST, and will stay up until the game fully releases on Steam. It’s worth noting that I would have preferred to make the game free for everyone on Steam for a limited time (like with the iOS release), but having a demo is required for participation in Next Fest.

In addition to the existing game content, the demo will also provide a first look at several of the Desktop enhancements I have planned!

As I mentioned in October, there are a variety of features I want to implement before fully launching the game on Steam. I’ve had some time to work on those now, so let’s see where we’re at!

Firstly, I have fully implemented Native Executables for Windows, MacOS, and Linux/SteamOS. This means the game can now be downloaded and run through Steam without the user having to install Java. I’m also going to be working on implementing some platform-specific installers (.msi, .dmg, or .deb) for direct download users. The .jar build will still be available as well.

Getting the game to run via Steam is only the first step though, I’m also almost finished implementing An Interface for Larger Displays. I shared a concept of this in October, which has now been fully implemented plus some refinements. The inventory panel has a more streamlined appearance, and some windows and other game interaction are now centered on it as well. Take a look (click or tap to enlarge each image):

While these additions are enough to show the game off as a demo, there are some other things I’d like to try and get done before or during Next Fest as well: (note that these pictures are mockups and subject to change)

There’s some obvious space to add more quickslots in this larger UI. Players have been asking for more slots for a while, and while I’m still unsure about adding a whole bunch, it would not be hard to bring the slot number up to 6 or so, assuming I can make them fit on mobile as well.

Another major thing I’d like to add is better mouse functionality, such as hover tooltips and right-click menus. In particular I think this could work extremely well with the new on-screen inventory. The player would be able to right click and select an action for their items, rather than having to open the full item window. This would also make game environment actions like examining much easier to do. 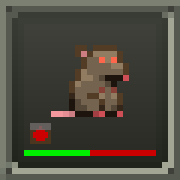 There’s also a nice empty corner at the top-left of the screen where I might add some more enemy info. This info would essentially be a summary of the details normally shown when examining an enemy, including a health bar and active buffs/debuffs. Each enemy in view would have its own little info pane. This would replace the little enemy indicator at the top right, and possibly also the boss health bar.

I would like to work on some steamworks integration (cloud sync, achievements, etc) for the game as well, but that will likely happen after Next Fest. I also haven’t forgotten about improvements like better keyboard and controller support, but I think it’s more likely those improvements will be worked on after the game initially releases on Steam.

Once I wrap up all the changes I want to do for Next Fest I’m going to start working on the actual game content additions I have planned for v1.2.0. As a quick reminder, v1.2.0 is going to include a variety of smaller content changes and additions:

I’ll make another blog post with more details on these closer to the release of v1.2.0.

I’d like to tentatively put the release of v1.2.0, and of Shattered on Steam, in the first half of March. The Steam version will cost $10 (though I might do a launch sale), and will include all the features of the mobile version plus the enhancements I’ve been working on. It will also include some supporter benefits, just like the iOS version. Moving forward the Steam version will get free updates in lockstep with the Android and iOS releases.

If you haven’t already, please consider wishlisting the game on Steam, and give the demo a try when it releases next week, or during Next Fest!

You can discuss this blog post on the Pixel Dungeon Subreddit, or on the Steam Community Forums!

Hey Dungeoneers! Sorry for the wait, but v1.2.0 is finally getting close to release! v1.2.0 will be fully launching on all platforms on Wednesday March 23rd ...