Hey Rat Punchers, v0.9.3 is finally ready for beta, sorry for the wait!

For those who’d like a refresher, I already talked about the general content coming in 0.9.3 in a previous blog post. For this post, I’m going into detail about the new hero abilities and tier four talents!

Prior to v0.8.0 armor abilities cost 1/3 of your hero’s current health, which was an unreasonably high cost in most cases. In v0.8.0 I changed this so these abilities would have an EXP-based charge system, which helped but was still too restrictive. To compound this the abilities were often situational, and the player had no influence over their functionality. This rigidity led to most players just not bothering with armor abilities at all, especially when a player’s build is pretty locked in by floor 21. 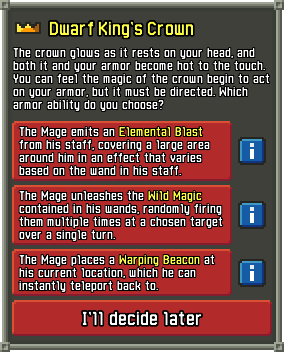 To address this, I’m heavily expanding the power budget and customization options for armor abilities! Abilities are generally a bit stronger, and are now on a much more permissive time-based cooldown, similar to an artifact or wand. The player also now gets to choose between 3 different abilities for each hero! This increased power and flexibility should make it much easier and more fun to work them into your build. All of these changes should make armor abilities feel like another significant part of hero customization, right alongside subclass and hero choice.

Here are some examples, with animated gifs!

Shockwave lets the warrior slam the ground, producing a shockwave that travels outward in a cone shape. Enemies caught in the wave are damaged and crippled. The wave travels through enemies, so it’s great for dealing with lots of foes at a time.

Elemental Blast lets the mage emit a circular blast of magic, with an effect that’s dependent on the wand the Mage is using. With fireblast it’s similar to the old molten earth ability. Elemental blast can be pretty impressive when it’s powered up, I shared an example of that on Twitter a week ago.

Death Mark lets the Rogue mark an enemy, causing them to take bonus damage for a few turns. As a tradeoff though, enemies won’t be able to die until the mark expires. Of course, if the mark ends when they have 0 health they’ll drop dead right where you left them.

Nature’s Power temporarily empowers the Huntress and her bow, giving her bonus bow attack speed and movement speed! The projectiles from the bow get a colorful grass effect too!

Note that all these talents are using placeholder icons at the moment, I intend to add proper ones before v0.9.3 releases. Balance is also subject to change before and after full release. 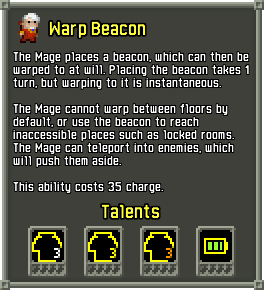 After selecting an armor ability, you can spend tier four talent points to further customize their functionality. Each ability gets 3 talents, plus a shared charge cost reduction talent. All of these talents take up to 4 points. Talents are a big part of an ability’s power budget, and so your talent choice will make a real difference in how an ability feels!

Here are the talents for the four abilities I shared above (you can tap and zoom if the text is too small):

Blast Radius is a pretty straightforward talent that makes elemental blast much bigger and more impressive; make sure you’re in a big enough room to take advantage of it though! Elemental Power improves both the damage and misc effects of elemental blast, perfect if you’ve got a wand effect you wand to amplify. Reactive Shield grants a defensive benefit on the side, and really encourages the player to hit as many enemies(or allies?) as possible.

Fear the Reaper helps convert the time enemies spend at 0 health into a benefit, as they’ll slow down or flee instead of hitting you. Dealthy Durability does nothing for actually harming enemies, but lets the Rogue build some defensive power from the mark instead. Double Mark is perfect for the Rogue who wants to deal with multiple enemies at once.

Growing Power improves the direct effectiveness of nature’s power, including bumping the speed up to a haste-level effect. Nature’s Wrath gives an additional on-hit effect to help with all the extra bow shots you’ll be making. Wild Momentum is a little more risky, but gives a substantial reward for finishing enemies off with her bow shots. 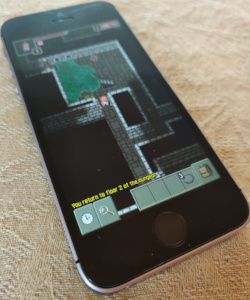 iOS is actually part of the reason v0.9.3 took a bit longer than expected. For a little while I was juggling priorities between the two. That’s settled down for now though, and so my development focus is fully on v0.9.3 until it releases. As for iOS progress, I’m currently planning to make a big announcement about iOS a little while later, perhaps in late June. In the meantime though, if you’d like to help out, please send me an email at Evan@ShatteredPixel.com. I am actively looking for testers!

The beta for v0.9.3 is live right now, and I expect to fully release it in around another two weeks. If you’re a Google Play user, you can opt into betas here. You can also get the latest release of the game (including betas), on the game’s Github page here.

If you enjoy ShatteredPD and want to help me keep making it, please consider supporting me on Patreon! Patrons get access to exclusive weekly mini blogs about upcoming updates, a monthly Q&A livestream, and also help determine content direction through community polls!